The Diddy Laugh is a very commonly used sound effect which often appears in TV, radio and film. When I hear it, it is like being hit in the ears with an iron. I like to point it out to people, who usually look blankly at me. Now I pass this affliction on to you.

A few years back I worked in recording studios, and one of the things I had to do was find sound effects. We had a large library of CDs, containing recordings of things such as typewriters, cars, elevators etc. In some areas, this library was remarkably comprehensive. There would, for example, be a variety of different 1970's telephones including push-button, dials, bells and the more contemporary "trim phone". The sleeve notes would often go into remarkable detail about the exact circumstances of the recording, such as:

However, in other areas the library was sorely lacking. Really useful effects like explosions, or lions, or people being hit over the head with banjos, were mysteriously absent. Sometimes, we found ourselves using the same effects time and time again, because there was little to choose from.

One category which was always pretty thin was that of child effects. Whether the job called for laughing, crying or sicking up milk, we often found ourselves desperate for decent sounds. I remember one effect that was frequently used. It was the sound of a giggling child (or possibly two children), aged about 8 or 9. I remember it because it cropped up in a video game I used to play called Diddy Kong Racing on the Nintendo 64. After that, I noticed it appearing in lots of TV shows, adverts and a few Hollywood films. I realised that my problems were not unique, and that sound engineers around the world seem to have the same trouble finding original effects.

Then I read about the Wilhelm Scream, which is an old effect that has become famous for its ubiquity in movies. I thought it was about time I started cataloguing the times I hear MY favourite effect (which I now call the Diddy Laugh) wherever it may be. Over the years my obsession has faded, but I may still add one now and again, when it next catches my attention.

First of all, acquaint yourself with the sound: Click here to listen to the full Diddy Laugh.


The laugh is sometimes fleeting. It appears in adverts and then disappears before it can be captured. When possible, I'll post links to it, especially if the source is available on Youtube. If you have any sightings, please send me a message.
at 15:35 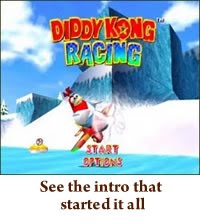